Legend of the Sea Devils

The extended Easter weekend is upon us, and the Sea Devils are taking over! To mark the upcoming episode Legend of the Sea Devils and for this weekend only, you'll have a chance to play a swashbuckling edition of Sky Ships. Plus, a treasure trove of events all long-weekend long:

Tonight from 6pm we'll be hosting a TWO HOUR edition of Games Night with all the favourites such as Natty Longshoes, Sky Ships, Vortex Ware, and many more, followed by a Watch-A-Long at 8:15pm of previous pirate outing The Curse of the Black Spot.

Then tomorrow from 6pm, our weekly Games Night will be a special TWO HOUR edition with some surprises along the way, alongside classic favourites Genesis of the Cybermen, Waters of Mars, Build Battle and more!

On Sunday from 5:30pm we'll be kicking off the party celebrations as we gear up for another episode of Doctor Who, with our Legend of the Sea Devils party. There'll be music and games of the special Sea Devils' Sky Ships from 5:45, before a final fireworks show at 6:30 in preparation for the episode starting at 7:10pm!! Then it's right back to #latest-episode-spoilers for all the reacting and theorising.

Then finally at 6pm on Easter Monday, we'll be hosting a Listen-A-Long to the brand new audio Doctor Who: Redacted, starring Jodie Whittaker!

Sorry to have to bring some bad news - giving out all these TARDISes for free has meant we've needed to make some cuts elsewhere. We've unfortunately been forced to downgrade our server TV license from a full colour one to only black and white. 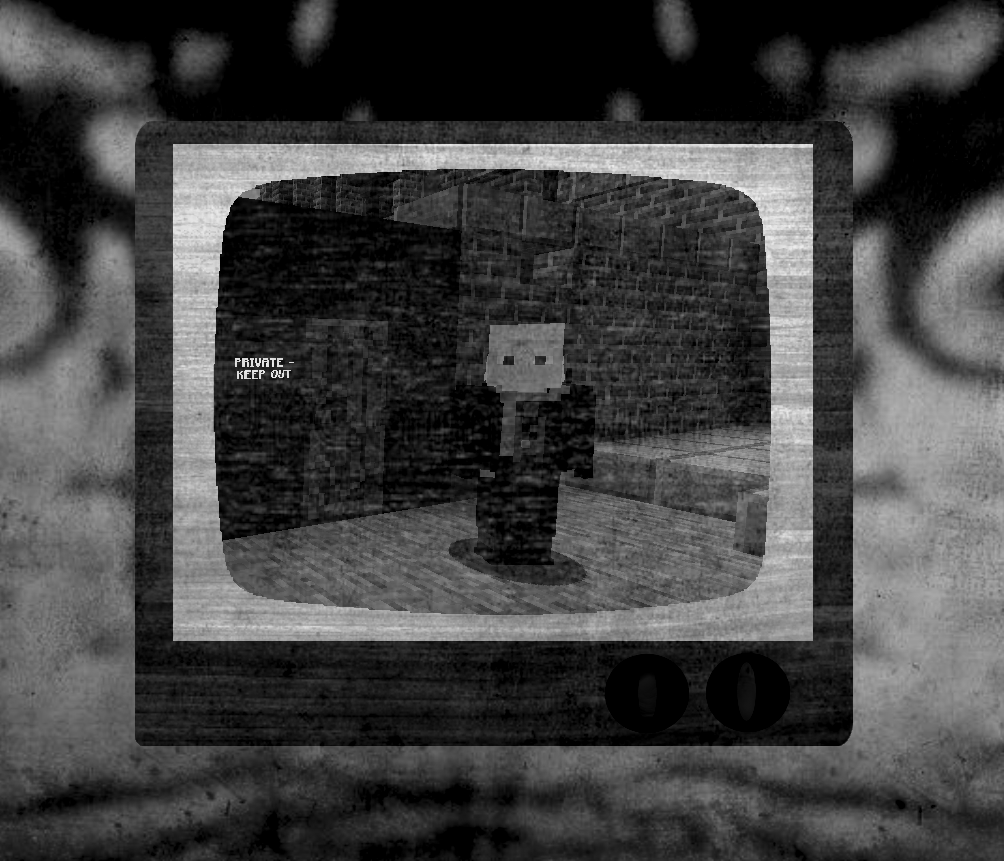 So from today, DWO Minecraft will be rebranding to a 60's Who only themed server! We've had to make some quick redesigns, and will have to ask you all to refrain from mentioning any episode from J*n P*rtwee onwards, but otherwise DWO is still the same old server you know and love! Just... a little bit older. Okay a lot older. But there's no limit to the builds we can create, from the beautiful vistas of Lime Grove Studio D to the dizzying heights of Lime Grove Studio G.

Losing access to colour might be a shock at first, but this is Doctor Who as it was meant to be experienced by the original creators, in it's truest form!

Today marks ten whole years of DWO Minecraft, if you can believe it! And it's only right that a big anniversary means we do something special to celebrate. Up to now we've always kept them as a thank you for donators, but it's finally time - every single player can now create their own TARDIS! 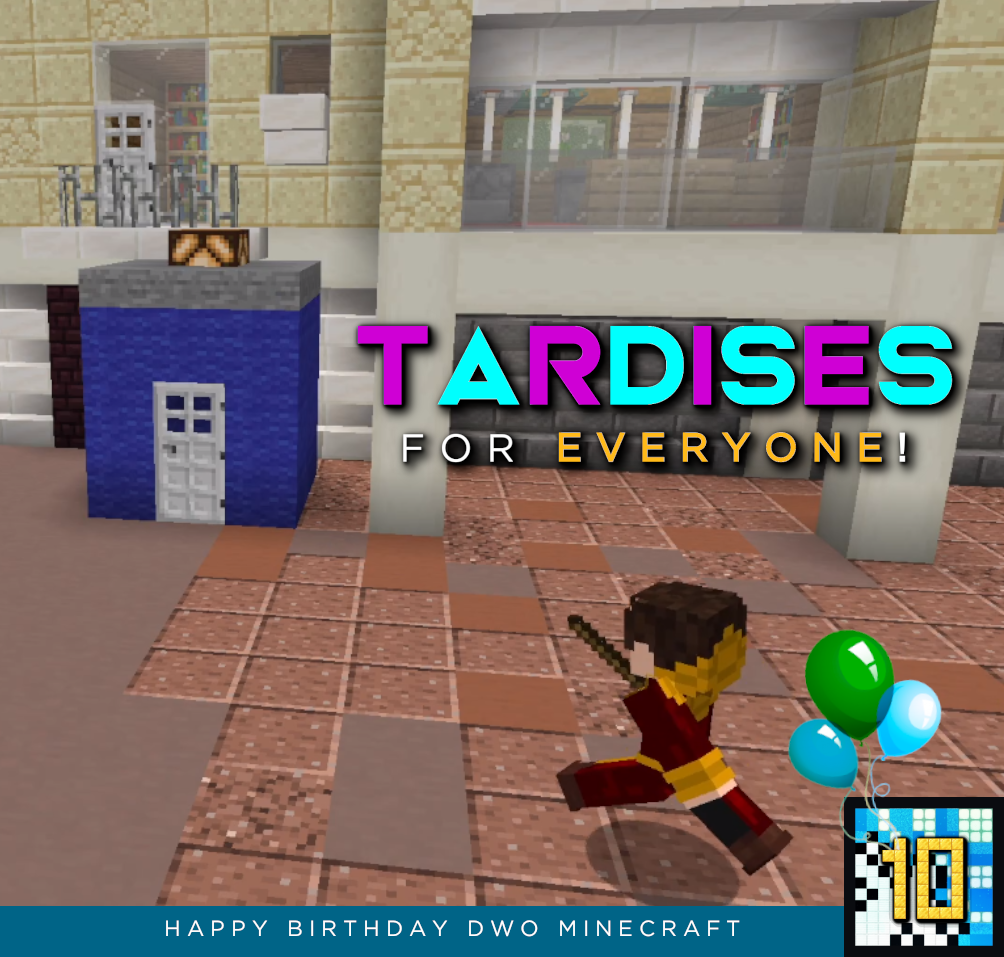 Get yourself to Gallifrey then head down the stairs to the TARDIS Crafting Room which has all the info you need on creating your own seed and choosing a desktop. Gallifreyans have access to a handful of the basic prebuilt seeds, as well as the empty frame which allows you to build your own completely custom interior. We'll also be working on updating and rebuilding the crafting rooms and the showroom in the coming weeks to fully showcase all the TARDIS options on offer.

However, this does come with one big caveat! As we've said before, there is a limit on the number of TARDISes we can have which is why we couldn't give them to everyone. Except now we are giving them to everyone, but that limit is still there! To make up for it, we are going to have to be more proactive about removing Gallifreyan TARDISes that go unused for too long. There's no change for Cardinals though - we'll still try our best to never have to delete or reset your TARDIS if we don't absolutely have to.

For everyone who's donated for Cardinal over the years, whether it was just for the TARDIS or the shiny blue name - thank you. We're only here ten years later because of the true kindness of donators who help pay for the server's running costs, and we aren't forgetting that! No other Cardinal perks are going anywhere, and we're always open to adding more if you've got ideas! To the next ten? 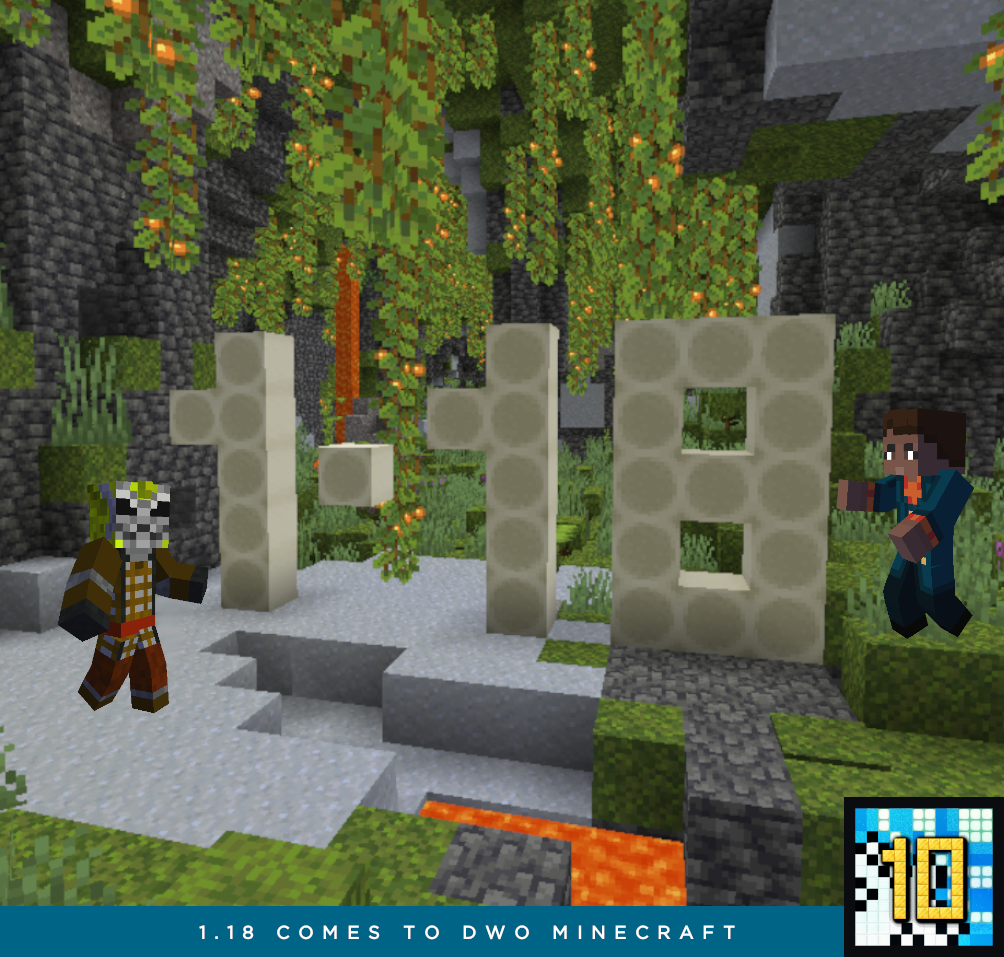 When we started we were on Minecraft version 1.1. Superflat worlds had just been added a month earlier, which probably means our creative world is one of the oldest still evolving! It would be another few weeks after we started before redstone lamps or jungle trees would be added. Remember when updates used to be every few weeks??

And now, just shy of ten whole years later - Minecraft 1.18 arrives! This is probably the most groundbreaking change in our history, so perfectly timed for our big birthday - the world height has now been increased significantly! This is across every world, so the Sandbox now has lots more room up above for the tallest police box, and your plots will have even more room for hidden underground shenanigans. In Survival, the entire world is generating brand new caves right below your feet - so get digging!

Now back at Christmas you may remember the Sixth Doctor gave you a choice, and he'll be true to his word - 1.18 means the Survival world will be expanding!! With all new biomes, caves, cliffs, mobs, ores and whatever else beyond the border to explore. This won't be right away - we'll give you some time to explore all that new underground first - but will be within the next few weeks, and we'll announce the time as soon as we know so that you can all be first to race for goats or whatever it is you're really after. It's also worth saying that we've no idea what biomes will generate with our seed and 1.18 so sorry in advance if it's not the biomes you wanted, but that's Minecraft! 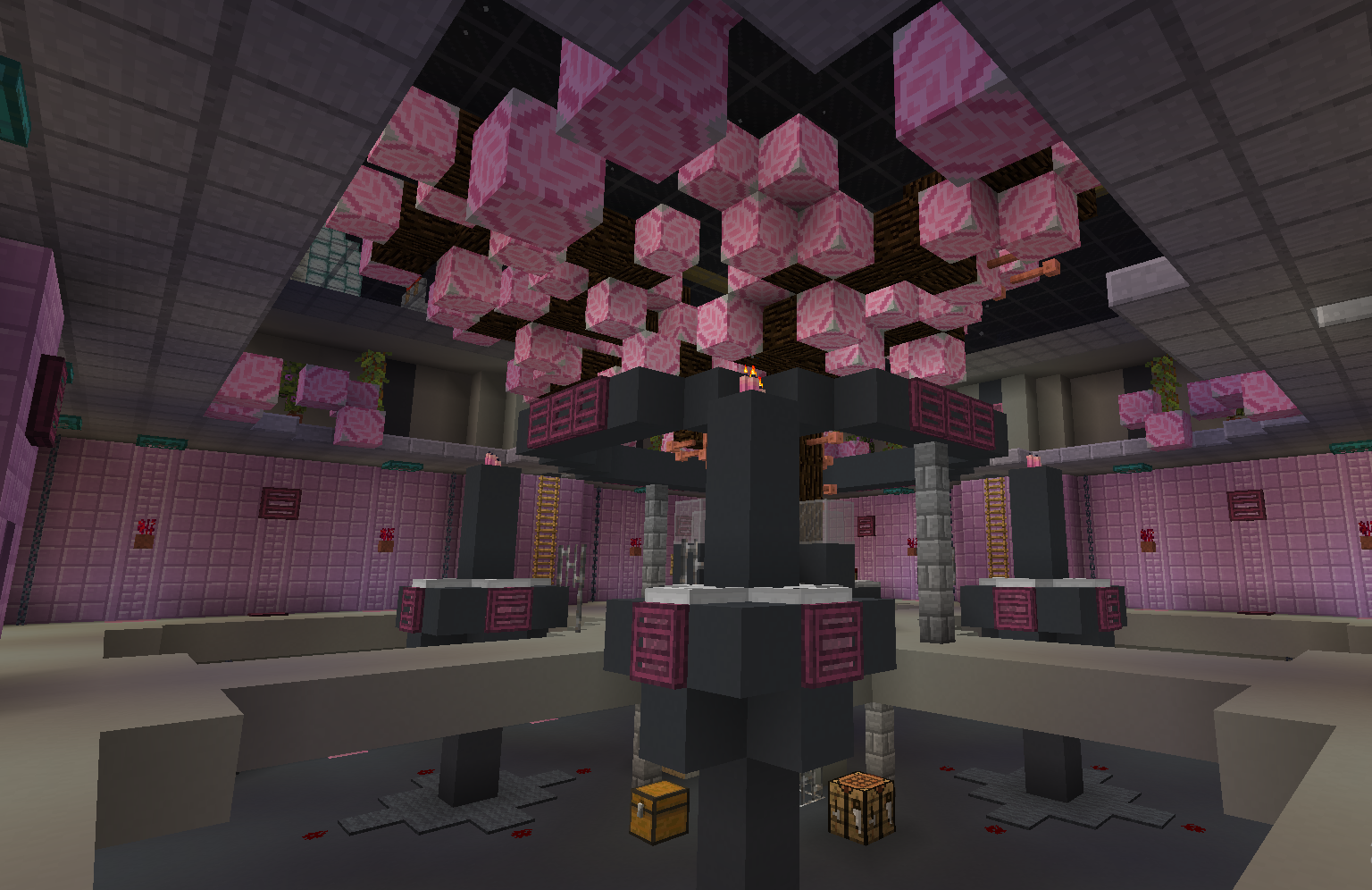 Plus, with a new update comes a brand new TARDIS console! The Division's Interuniverse Console, from Flux! Grow it yourself using Pink Glazed Terracotta as the seed.

As usual if you find any issues or bugs with the update, please make a /modreq or let the staff know.

Ten whole years worth of builds from nearly sixty years worth of Doctor Who - it's really starting to accumulate! You probably noticed we recently expanded all our set areas in order to fit even more detailed recreations of people places and things from the show.

But with so much stuff to see, finding just the episode you're looking for can be an impossible task! So that's why we're introducing the Builds Menu, as your handy catalogue and guide to all the eras of the show. Just type /builds at any time to browse through all the builds from the server's history. You can also have a look at just builds you've worked on, or favourite builds you love revisiting and need to get to quickly! Ideal for those of you who know there's the perfect set for your roleplay somewhere around here, but you just can't quite find it. 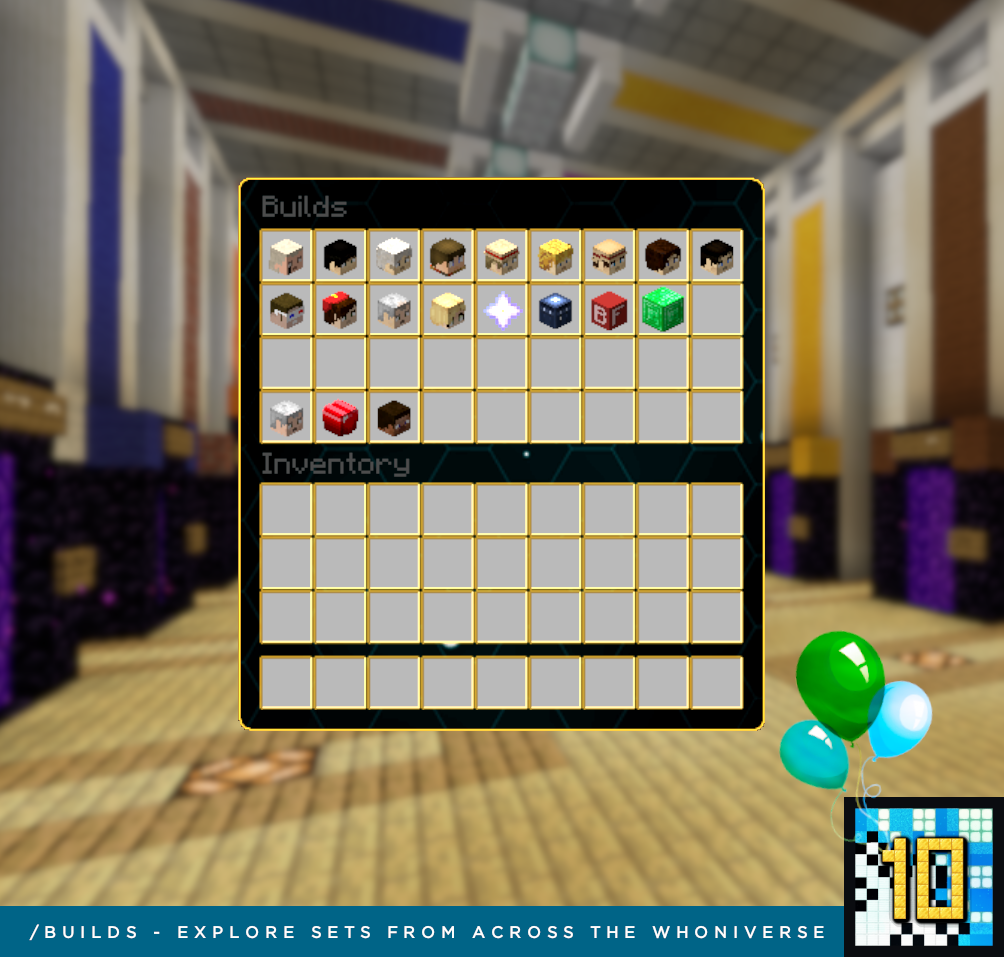 This is taking the place of the old build portals, which were great for highlighting our favourite builds but left a lot of people's builds out of the limelight! At the end of the National Gallery corridor the portal will now open up the menu for you instead, to find exactly what you're looking to explore.

Got any ideas for how we could make this even better or more useful? Shout! We're nowhere near done cataloguing all the builds yet either, so more will keep appearing soon. If you've got a particular build that doesn't seem to be in there, feel free to let us know and we'll get it added.

Legend of the Sea DevilsDWO 1965!TARDISes for Everyone!Minecraft 1.18Build Exploring Made EasierA Decade of DWO Minecraft!